Consumer theory is the theory of the consumers’ demand and choice. It deals with how and why consumers make a decision or make choice regarding the consumption quantity of a particular good or set of goods, at a given price and other circumstances. This premise of the consumer theory is based on the idea and assumption that the consumers’ choices can be inferred and utility. It is also based on the idea that consumers always want to maximize their utility or satisfaction and whatever they like from their choice can also be inferred.

In consumer theory, we study the money spending decision of people on various goods based on their taste and preference and they are constrained by the given budget. Knowing the taste and preferences, money-spending decisions and income of the people is very important in shaping the economy. This is because demand for goods or consumption creates the induced investment that leads to the further generation of income and employment. To understand the consumer theory in a better way it is necessary to understand the basic assumptions about the consumers’ behaviour. Following are the three basic assumptions about consumer behaviour. 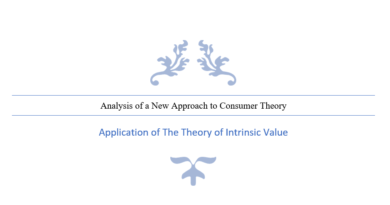 Analysis of the Lancaster Approach to Consumer Theory: Application of The Theory of Intrinsic Value