In April, after the nation locked down in response to the COVID-19 epidemic, the states’ revenue fell dramatically. For example, Delhi saw a decline of about 92% in its revenue from April 2019 levels.  Even before the lockdown, the situation was grim due to the economic slowdown. However, the lockdown threatened even the base expenditures of the state, the effect of which will be faced by the citizens eventually.

According to the budget estimates of 2019-20, about 52% of states’ revenue will come from the states themselves and 45% from the centre. Within the states’ revenue pie, about 85% comes from various taxes, the main tax heads being GST on liquor and petrol. These are the two main levers states are pulling today. Several states like Delhi and Maharashtra have taken Centre’s lead and increased excise on fuel. Similarly, the states have also increased the excise on liquor. For example, Delhi imposed an additional duty of 70% as ‘Corona Fee’. But the expected gains didn’t stick. In a GST meeting on June 12, Union Finance Minister Smt. Nirmala Sitharaman told state representatives that only 45% of the indirect tax target has been met by the Union govt in April and May.

Post-COVID, states asked that Centre to raise their external borrowing boundary. The Centre responded by allowing the states to borrow an additional 2% of their GSDP, out of which 0.5% could be raised without any conditions, and 1.5% to undertake reforms in various sectors like public distribution system of foodgrains, ease-of-doing-business, etc. As a result, the states are unable to raise enough money through borrowing. 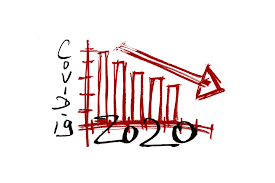 The uncertain recovery of the Indian Economy

One thought on “COVID-19 has nearly broken the Indian States”